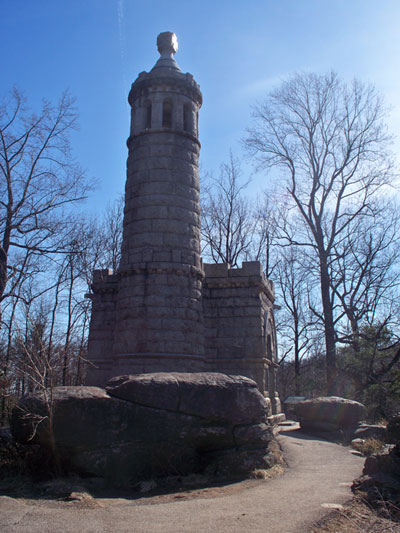 The “castle” on Little Round Top is always a favorite of visitors to the battlefield. Dedicated on July 3, 1893 at a cost of almost $11,000.00 it is without question the largest & most expensive regimental monument on the field.

The memorial represents the 44th New York & (2) companies from the 12th New York Infantry Regiments & as is the case with most of the monuments the castle has a story to tell – the dimensions of the monument were purposely designed to reflect the numeric designations of the units it represents. The tower is 44 feet high & the interior chamber is 12 feet square.

There is an observation deck which can be reached by climbing a circular staircase inside.

Bronze plaques found inside the chamber contain a complete muster roll for each company of the regiment.

This memorial was designed by Union General Daniel Butterfield who also adapted the music for “Taps” for his Brigade (the Third), First Division, Fifth Army Corps, Army of the Potomac in July, 1862.

The 44th New York was raised as a memorial to Ephraim Elmer Ellsworth who was the first Union officer killed during the war.