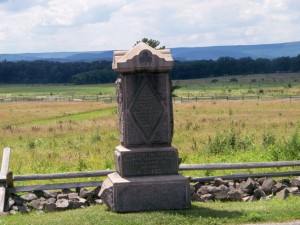 The State of Delaware supplied two regiments for the Union at the Battle of Gettysburg. One of these, the 1st Delaware, had the opportunity to spearhead a counter-charge on July 3rd as the the attack of General Pickett faltered at the wall these men were defending. This counter-assault by the men from Delaware resulted in the capture of several Confederate battle flags & many prisoners. The Battle of Gettysburg was to cost this unit 77 casualties & at battle’s end they were led by a lieutenant who was the highest ranking officer left. Their memorial was dedicated on June 10, 1886 & may be found on Hancock Avenue at the wall over which they charged that July day 150 years ago.