On July 1, 1863, an unidentified young soldier of the Union Army was mortally wounded on the Gettysburg Battlefield. Dying, he clung to the only memento he possessed–an ambrotype (a kind of photograph) of his three small children. We don’t know what he experienced in those final moments, but in one of his final letters he composed a heart-wrenching poem that expressed how deeply he missed his family (published in 1999 in Gettysburg’s Unknown Soldier). With his thoughts dwelling upon them, he breathed his last…and that’s where the story begins.

A local girl discovered the ambrotype in the soldier’s hand and took it to a local tavern, where Dr. J. Francis Bournes saw it and took up the cause of finding the now-bereaved family. She sent a description of the children in the picture to the newspaper (they didn’t have the technology to reprint the image yet) and the story swept across the Union. Copies of the image were made and sold for charity as everyone searched for the family.

The story found its way to the American Presbyterian, a church publication, in Portville, New York, where Phylinda Humiston happened to read it. It was October, and her husband had not sent a letter since the Battle of Gettysburg–she feared the worst. She contacted Dr. Bournes, who sent her a copy of the ambrotype, and then Mrs. Humiston positively identified her three children, Franklin, Alice, and Frederick, as those in the picture. The unknown soldier had a name: Sergeant Amos Humiston.

Dr. Bournes made a special trip to NY to return the original ambrotype to Amos’ widow and children. The story had become so famous that there was an outpouring of sympathy donations, which were used to establish a Soldiers’ Orphans’ Home in Gettysburg in 1866. Mrs. Humiston moved to Gettysburg to serve as the first matron of the orphanage, Amos’ body was moved to the Gettysburg National Cemetery, and a monument now marks the spot where he died. You can visit it on Stratton Street, beside the firehouse. 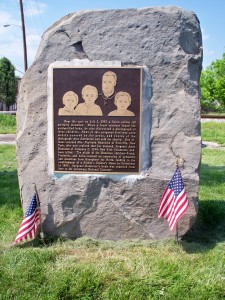 …or is it? Phylinda’s successor was not as kind-hearted to orphans– learn more about the horrific abuses Rosa Carmichael brought upon the orphanage and tour the dungeons today!