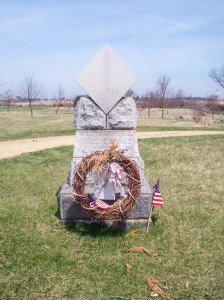 Union Major General Daniel E. Sickles is one of the most controversial figures at Gettysburg.

Commander of the Union 3rd Corps during the Gettysburg campaign, General Sickles was also a politician before & after the War Between the States.

On July 2, 1863, General Sickles was not at all happy with the position on the line that he was assigned.  He felt the higher, more elevated ground to his front would be more defensible & offer his artillery a better field of fire. So, without authorization to do it; General Sickles moved his entire corps forward. This act unhinged the Union line & left the, now exposed, 3rd Corps vulnerable to attack from multiple directions & this is exactly what happened.

General Sickles was mounted, providing encouragement to his men on July 2nd when a 12 pound confederate cannon ball struck him on the right leg. The general’s horse was unhurt but, the injury would result in amputation for Sickles.

The small diamond shaped marker found on the grounds of the Trostle Farm was placed there in 1901 & marks the location of General Sickles’ wounding.