At Gettysburg Battlefield Tours, our claim to fame is knowing all about the Battle of Gettysburg (obviously). However, there are lots of little details about the famed battle that many people don’t know. 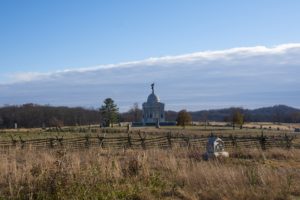 On the second of three extremely bloody and costly battle days, the fighting took place at famous locations such as Devil’s Den, Little Round Top, Cemetery Hill, Culp’s Hill, and the Peach Orchard. All told, the second day’s battle required over 100,000 soldiers, 20,000 of whom ended up killed, wounded, captured, or missing. Overall, the battle ranked as the 10th bloodiest battle of the Civil War – all in just one day!

Female soldiers fought on both sides of the battle

At the time of the Civil War, women hadn’t yet received many of the rights we enjoy today. However, that didn’t stop hundreds of women from enlisting. Why would they enlist, rather than staying home like a proper demure woman? Some were drawn by a sense of adventure, while others felt passionately about the cause – still others longed for the opportunity to have a steady income of their own. There are nine verified female soldiers who died on a Civil War battlefield, and one of them was killed at Gettysburg.

The wagon train of wounded Confederates was 17 miles long

After a shocking and disheartening defeat, the Army of North Virginia fled Gettysburg on July 4 bound for home. There were enough wounded soldiers to fill a 17-mile wagon train that filed back down through Pennsylvania and Maryland, bound for Virginia. However, the company met trouble when they reached the Potomac River; heavy rainfall arrived as the battle ceased and lasted for several days, causing dangerously high water levels and blocking the troops’ passage across.

Gettysburg is considered the “high watermark of the rebellion”

Riding on his army’s peak strength, General Robert E. Lee commanded his troops across the Mason-Dixon line, determined to take Gettysburg as well. Lee knew how important it was to overtake Gettysburg; a victory here would have allowed for Confederate forces to overtake Philadelphia, Baltimore, or even Washington D.C. However, after a shocking turnaround from Union forces, the Confederate army was driven back over the Potomac and would never again regain its momentum.

Did you know all of these Gettysburg facts? If you did, you’re quite the expert! If you didn’t, there’s plenty more to learn on a Gettysburg Battlefield tour. Join us on a tour today. We look forward to seeing you soon!