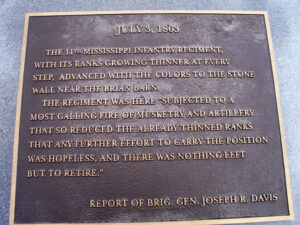 Located on Seminary Ridge across from the North Carolina Memorial a rare Confederate Regimental marker can be found. The 11th Mississippi Infantry memorial is placed near where the regiment formed for battle on the afternoon of July 3, 1863. On the monument is Sergeant William O’Brien of Company C raising the flag & urging his comrades forward. Sergeant O’Brien was the first of 8 color bearers who were either killed or wounded during Pickett’s ill-fated charge. For the true Gettysburg “buff” there is a second marker to this unit located near the stone wall at the Bryan Barn noting the farthest advance of the remnants of this regiment on July 3rd. The 11th Mississippi entered the battle with 592 men – of these, 102 were killed, 168 wounded & 42 listed as missing or captured; a staggering 53%. 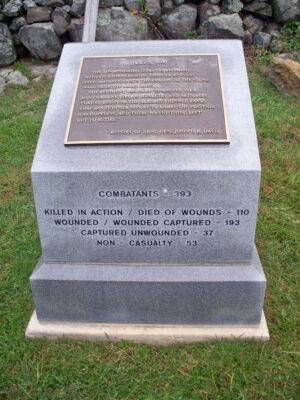