The battle-scarred skeleton of an oak tree marks the junction of Doubleday Avenue and Mummasburg Road in Gettysburg. From a distance, you might wonder why such a tree is left standing, why isn’t a lively sapling planted in its place? Only as you draw closer do you begin to realize that this forlorn tree is more than it appears…that it stands just a little too straight…that it, in reality, is a monument.

The 90th Pennsylvania Infantry is forever memorialized in the “Stalwart Oak Tree” just described, dedicated September 3, 1888. The sides are scorched, the limbs torn away, in an imitation of the artillery fire damage that claimed the lives of man and nature alike. Of the 208 men from the 90th who fought at Gettysburg, just 8 were killed, but 45 were wounded and 40 were missing. It doesn’t seem like a lot, on the grand scale, but that was 45% of their number.

Examine the Stalwart Oak with care—you’ll find, near the top, a nest with mother bird and hatchlings. Many have speculated over the meaning of this sculpted detail. There are two primary schools of thought: some believe it tells the story of a soldier under fire, risking his life to rescue the baby birds and their fallen nest; others postulate that the nest is symbolic, representing new life rising from the tatters of war, much like the Phoenix being reborn. Either way, the monument is a powerful testament that deserves to be revered. 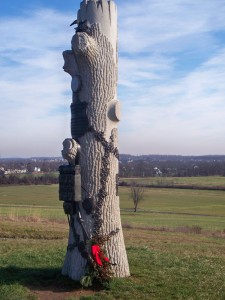 What does the Stalwart Oak say to you? Read about another powerful monument here.