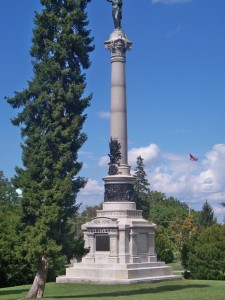 In 1886 only two New York State monuments had been erected on the fields of Gettysburg. Those two being the 14th Brooklyn & the 124th New York with neither of these two representing the City of New York.

Veterans of the 83rd New York Infantry had a site chosen & a committee selected to watch over the construction – all they needed now were the funds to begin. Friends & survivors of the regiment were solicited for contributions & by Sept. 1887, almost $3500.00 had been collected.

Dedicated on July 1, 1888 – the monument to the 83rd New York was to become one of the single largest memorial dedications the battlefield would see. It was attended by veterans of the unit itself, plus other members of the First Corps, ranking officers from the battle & the entire 9th New York National Guard which was sent by the Governor of the State.

The memorial is a fifty-one foot tall shaft on levels of red & white granite. On top is a bronze cannonball & eagle. The eagle weighs in at 700 pounds & has a wing span of almost six feet.

The regimental badge can be found at the base with the motto “Ratione Aut Vi,” which means “By Reason or Force.”