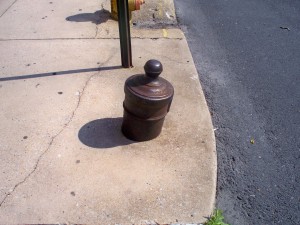 Located on Baltimore Street in front of what was once the office of “The Gettysburg Compiler” the Democratic town newspaper, is a half buried cannon affectionately known as “Penelope”.

Henry Stahle the outspoken publisher of the “Compiler” would have this cannon fired in celebration after every Democratic election victory.

In 1855, however, the gun was overloaded with powder & the barrel exploded upon firing. Rather than toss poor old “Penelope” on the trash pile, Mr. Stahle elected to have her buried in front of his office for all the world to see.

She was there during the Battle of Gettysburg & soldiers on both sides had to run around this strange sight. It makes you wonder what possibly could have gone through their minds as they tried to figure out the story behind this unique piece of town history.