“Scarcely any Union regiment was in the heart of the storm longer than the Twentieth Massachusetts,” says History Today magazine. They weathered through nearly every battle of the Army of the Potomac, and a few others to boot. At Gettysburg, the men defended a pivotal position during Pickett’s Charge—an assault that, if successful, could have turned the tide of the Civil War. For all that they accomplished, the War took its toll on them: they suffered the highest casualties of any Massachusetts regiment and the fifth highest in the Union. 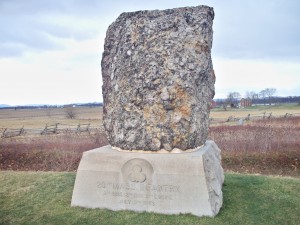 Known as “The Harvard Regiment,” the 20th Massachusetts Volunteer Infantry was formed in Roxbury, MA. All of the officers, and a portion of the enlisted men, were Harvard graduates, hence the nickname. The regiment was catapulted into battle in October, 1861, a mere month out of basic training; it was four years before they laid down their weapons at the end of the war. Among the Harvard men who served was Oliver Wendell Holmes Jr., who would go on to be nominated to the Supreme Court by Teddy Roosevelt and be remembered as one of the most influential Justices in American history.

One “celebrity” of the Harvard Regiment was Colonel Paul J Revere, who was killed in the Battle of Gettysburg. He was the grandson of his namesake, the midnight rider and patriot of the American Revolution. An unusual monument—a puddingstone boulder—was erected in memory of Revere and the 43 other men of his company who died at the Battle of Gettysburg. The 30-ton colossus, dedicated in 1886, was imported by train from Roxbury, where many of the soldiers grew up. Now, it can be visited on Hancock Avenue, near the immortalized “copse of trees” and the Confederate High Water Mark.

For more monuments that “rock,” click here and here!