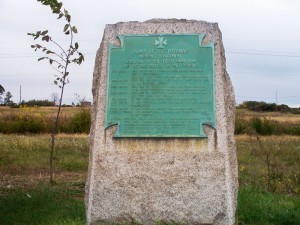 Located across the street from the McDonald’s Restaurant on Route 30 East is a small marker which is all that remains of the largest field hospital ever built in North America…….Camp Letterman.

An order issued on July 5, 1863 by Dr. Jonathan Letterman, medical director for the Army of the Potomac, established a general hospital on the farm of George Wolfe located on the York Pike.

It was set up in view of the railroad that was to bring in medical supplies and take out wounded men following their treatment at the camp. Those soldiers, who were able, were transported to permanent hospitals in Philadelphia, Washington and Baltimore.

Hundreds and hundreds of tents were at the site for the wounded, supplies and surgery. A morgue and cemetery were also put in place. There were more than 1200 burials at the camp. The Union dead were removed in 1864 and re-buried in the new national cemetery while the Confederate dead were relocated over the years to cemeteries in the South.

By November, 1863 only a few patients remained at the camp. The camp was closed shortly thereafter.