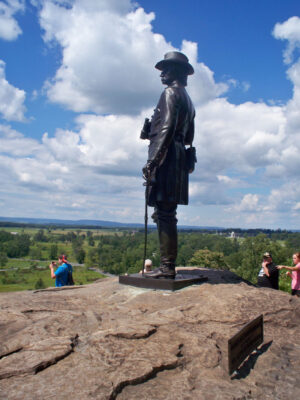 Known as the “Savior of Little Round Top”, the portrait statue of General Gouverneur K. Warren was dedicated on  August 8, 1888 & was the first statue to a New York commander at Gettysburg.

The General is standing atop the boulder from which he noticed the Confederate advance on July 2nd. At the time, Little Round Top had been left almost completely unoccupied with the exception of a few signalmen who were preparing to leave. Recognizing the importance of the hill, General Warren instructed the signalmen to remain to give the impression of occupation while he sent aides off to secure immediate reinforcement. This prompt action allowed the hill to remain in Union hands.

All the funds needed for the construction of this memorial were privately raised.