The Civil War brought this military man out of retirement—25 years later! 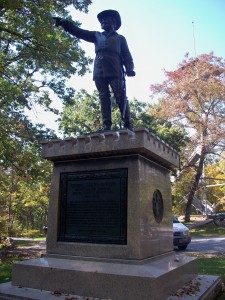 General George Sears Greene lived a fascinating life—he might just be the most interesting Civil War figure that you’ve never heard of. Second in his class at West Point, he stayed on for four years as an assistant professor in mathematics and engineering, and his students included a certain cadet named Robert E. Lee. In 1836, Greene retired from the army and that was the end of his military career…until 1862.

General Greene was 62 when the crisis of the Civil War drove him to re-enlist, making him the oldest Union commander in the Army of the Potomac. “Pap Greene,” as they sometimes called him, led with an aggressiveness that surprised many, and he applied the ingenuity that had brought him success as a civil engineer. The pinnacle of his military career was the Battle of Gettysburg: Greene and his command of 1,350 New York soldiers defended the peak of Culp’s Hill against Confederate troops that outnumbered them 3 to 1.

That was when Greene’s civil engineering influences proved not just beneficial, but decisive in the outcome of the battle. Prior to the confrontation, he insisted that his men prepare by building strong fortifications on the field of battle—an idea that his superiors showed no interest in. Those fortifications allowed Greene and his regiment to hold off multiple attacks and defend the vital Union supply line that ran along the Baltimore Pike behind them. Greene’s stand played a crucial, but often underestimated, role in the Battle of Gettysburg.

After the War, Greene returned to civil engineering and is remembered as one of the founding members of the American Society of Civil Engineers and Architects. He died just shy of the turn of the century, at the age of 97. A 2-ton boulder was transported from Culp’s Hill to Greene’s grave in Warwick, Rhode Island, where it marks his burial spot. On September 26, 1907, the State of New York honored General Greene with a portrait statue on the Gettysburg Battlefield, which you can find atop Culp’s Hill, gazing down the slopes that Greene once defended.

The Gettysburg Battlefield is home to an incredible number of breathtaking monuments and memorials! Read about some of them here and here!