Born Mary Virginia “Jennie” Wade, Jennie Wade worked as a seamstress with her mother during the Civil War era.  Because of the pending war, Jennie, along with her brother and neighbor boy left their home on Breckenridge Street to go to her sisters as she felt it would be safer, and her mother was already there helping with her sister Georgia’s newborn. 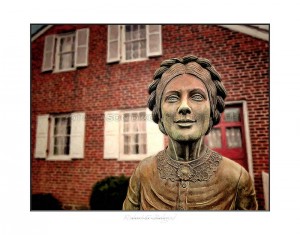 Unfortunately this turned out to be a horrible mistake, as the Confederate forces moved into Gettysburg on July 1, 1863. Jennie’s family helped the Union soldiers by providing bread and water, and on a fateful July 3rd morning Jennie had just begun kneading a new batch of dough when she was hit by a Confederate soldier’s bullet which had pierced the house. The round traveled through Jennie’s shoulder and heart, and came to rest in her corset.

At just 20 years old, Jennie Wade became the only civilian casualty killed during the Battle of Gettysburg.

Learn more about Jennie Wade and the Jennie Wade House via the button at the top of the page, or in our “Quick Links” section to the left.