One of our favorite things to do with our social media pages is to scroll through the dozens of photos guests share when they visit Gettysburg. Some of the views guests capture from atop one of our double decker tour buses are incredible, and even after all these years we still find ourselves amazed by each unique photo that our visitors capture.

Thanks to the father of photojournalism Mathew Brady’s own vision, and the photographs he commissioned, we’re also able to appreciate the realness of the carnage from the Civil War, the people involved, and other images of the time.

In his late teens, Brady met up with portrait painter William Page and Page’s former teacher Samuel F. B. Morse. Better known for inventing the telegraph and developing Morse Code, Morse was a professor at New York University who taught art, painting, and design, and he took Brady under his wings. Here, Brady learned Morse’s process of creating a mirror image on a silver-surfaced copper plate, a process known as daguerreotype and named after Frenchman Louis Daguerre.

Using his new training, Brady eventually moved on and opened his own studio in New York City, where he photographed many famous people, including Andrew Jackson and John Quincy Adams, and collected numerous awards for his work. 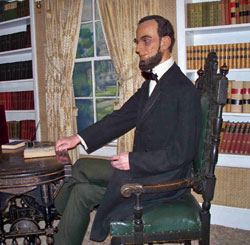 As the Civil War broke out, due to his connections Brady reached out to President Lincoln for permission to travel to battle sites to document the war. Financed with his own funds, Brady hired a staff of photographers to help capture the essence of the war. He supervised and organized all activities of his team, and many of the photos from this time, including the First Battle of Bull Run, Antietam, and the Battle of Gettysburg, were thanks to his and his team’s efforts.

One obvious challenge for Civil War photographers was that the battles weren’t scheduled, so the photographers couldn’t plan to be present when the fighting started, and getting to a distant site would usually take longer than the fighting would last. Brady did come to Gettysburg, but not until about 2 weeks after the battle.

Unfortunately, the cost of his Civil War project quickly drove Brady into debt, and the public’s interest in the collection was dim due to the harsh realities of war and the population’s lack of interest in reliving the hell their fellow men and their families went through. Brady had expected the government to buy the photographic plates that he had created, and when the government declined to do so, he had to sell his New York studio and go into bankruptcy.

Mathew Brady died in a charity ward in 1896, but without his contributions we would be missing some of the most iconic imagery of the times. The truth is, you likely are in possession of some of Brady’s work at this exact moment. If you have a penny and/or five dollar bill, one of Brady’s photographs of Lincoln was used for these bills!