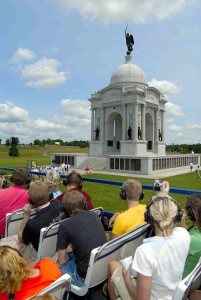 Those of us who work for Gettysburg Bus Tours feel fortunate every day for our role in commemorating the Battle of Gettysburg and American Civil War. Thanks to the Gettysburg National Military Park and National Park Service, we regularly visit over a thousand different well-maintained Confederate and Union monuments and markers, historical buildings, cannons, and more, some in an environment that closely resembles this moment in history.

Due to the sheer volume of things to see in Gettysburg, we recommend spending several days if you want to be able to see and do it all. We know this isn’t always possible with everyone’s tight schedule, so here’s a short list of monuments our guests describe as can’t-miss highlights.

Narrowing our list down to just five guest favorites was extremely difficult. Did we hit the five you would’ve picked? What are some of your favorites? Let us know on our Facebook page, and be sure to see as many as you can on your next trip to Gettysburg!