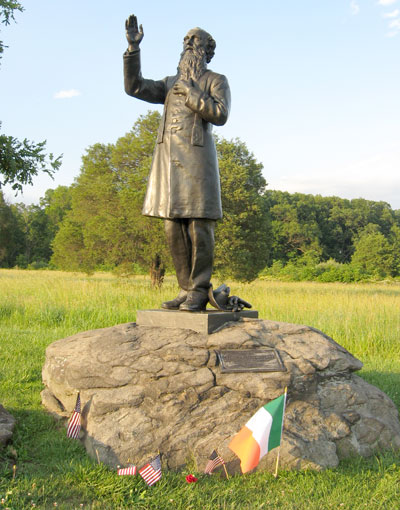 Father William Corby the chaplain of the 88th New York Infantry was just 29 years old on July 2, 1863. As the 88th New York, part of the famous Irish Brigade, prepared to go into battle – Father Corby stepped up onto a boulder (many historians think the boulder where the monument stands today) and raised his hand. Nearby officers and men numbering as many as 300 became silent as the battle swirled around them. Father Corby granted general absolution and prayed for their safety. Once completed, the men marched off toward the gunfire with the priests parting comments still fresh in their minds as Father Corby said that the church would refuse a Christian burial to any man who failed to do his duty that day.

Father Corby survived the war and became president of Notre Dame University where an identical statue stands on the college campus marking his grave.