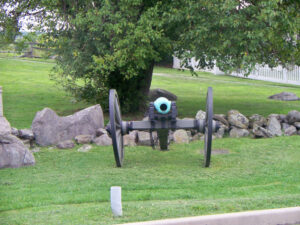 Throughout recorded military history there have been many instances of soldiers naming their weapons. This happens quite often in the artillery branch of the service & we have such an example here at Gettysburg.

To be found at the farm once owned by the Trostle family is a 12 pounder Napoleon cannon named “CORA” by her crew. The name, painted on the breech, appears to be more a form of endearment than a title designed to strike fear into the hearts of the enemy.

While the gun barrel did not take part in the Battle of Gettysburg, it is Civil War vintage & saw action elsewhere.

Until a letter or a diary surfaces that mentions a gun named “Cora” this is destined to remain a mystery of history.