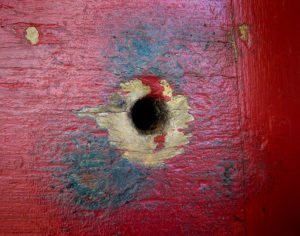 Some Gettysburg folks get all the fame; don’t you agree? Today, we want to touch on a couple of “background” characters who actually played a crucial role in the history of Gettysburg – specifically, the only civilian death in the Battle of Gettysburg.

Jennie Wade is famous, all right – but for all the wrong reasons. Jennie was 20 years old during the Battle of Gettysburg. She was busy baking bread for the soldiers fighting outside her door when a stray bullet found its way into the home, striking Jennie in the back and killing her instantly.

Jennie’s story was tragic; a life cut short is truly the worst sentence of all? Well, some may argue that an even worse perspective is that of Mary Wade, Jennie’s mother. The morning of that fateful day was just like any other, until Mary heard the shot and saw her daughter crumple to the floor.

A Life Left Behind

Upon hearing the screaming inside the house, Federal soldiers ran in to see what was wrong. The soldiers, knowing that the bullets would continue to fly, instructed Mary and Georgia (Jennie’s sister) to go into the cellar on the other side of the house, where it would be safer for them.

However, there was one small problem: Mary refused to leave Jennie’s body behind. The soldiers, knowing this was the only way to get Mary and Georgia to safety, wrapped Jennie in a quilt and carried her up the stairs to a hole that had been blown open by a stray shell the day before. Climbing through the hole, the soldiers followed Mary down into the cellar, where the group spend the next day and night waiting for the fighting to end.

When the battle was finally over, Jennie’s body was placed in a wooden casket that had originally been prepared for a soldier. The casket was buried in the garden behind her sister’s house for six months, until it was moved to the nearby German Reformed Church cemetery. Today, her casket is buried in the Evergreen Cemetery.

Mary Wade never quite recovered from her daughter’s untimely death. Her spirit still fitfully haunts the home, along with the spirit of Jennie herself, trying to make sense of it all. Come hear Mary’s story from her own point of view – history tours of the Jennie Wade house can be purchased through our Value Plan, individually during the day, or on one of our evening ghost tours. Visit the home for yourself, see the fateful bullet hole created by the bullet that ended Jennie’s life, and even visit the cellar that shrouded the family from the days of violence.

Let Gettysburg Battlefield Tours feed your imagination, but tread carefully – you never know when Mary or her mother will come to you, warning you to stay out of the line of fire!