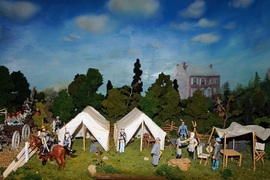 When you were a young child, your imagination could run wild with a few action figures and a couple square feet of carpet in your living room. As we grow older, our boundless creativity is reigned in by demanding work schedules and busy lifestyles. Unleash that childlike imagination once again at the Gettysburg Diorama & History Center!

The Gettysburg Diorama is a unique, awe-inspiring piece bringing the entirety of the three-day Battle of Gettysburg to life. No, not literally – the diorama in the Night at the Museum movies was a special case! This completely stationary, yet marvelously exciting diorama features the entire 6,000-acre battlefield in one handcrafted expanse.

This Diorama is the largest military diorama in the United States, and its three-dimensional landscape paints a beautifully haunting birds-eye perspective of the bloodiest battle in the Civil War. You’ll gain a brand-new perspective into the scope of this historic chain of events.

The Making of the Diorama

The Diorama was painstakingly created – over 20,000 hand-painted soldiers, horses, cannons, and buildings adorn the sprawling battlefield scene. Our personal favorite part? The dazzling 30-minute light and sound show depicting the three-day battle, from the first shot fired to the last moments of courageous battle at the high-water mark of the Confederacy.

In order to fully appreciate the incredible bravery and sacrifice inside each of the soldiers who fought in the battle of Gettysburg, the Diorama is built completely to scale and with staggering historical accuracy – every item in place on the rolling landscape truly existed in 1863 when that first gunshot cut through the air. See the generals mourn their fallen men and the civilians shield their families from the tragedy unfolding before them.

Surrounding the beautiful Gettysburg Diorama is an array of genuine historical items. Saddles that carried soldiers into battle now sit peacefully on display; one of Lincoln’s Life Masks sits, with matching molds of his hands and letters he wrote, depicting the incredible toll the battle took on our 14th President.

Large Civil War paintings decorate the walls of the Gettysburg Diorama & History Center. The breathtaking views of the seemingly peaceful landscape nearly contradict the knowledge of the brutality that was alive during this turbulent time.