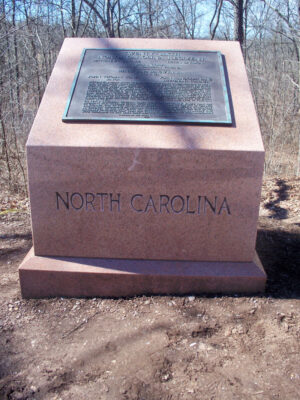 Many visitors that come to Gettysburg question why there are so few confederate markers on the field. There are a number of reasons – #1 it was a confederate defeat #2 after the war the South was unable to financially channel many funds toward memorials and #3 the North plain & simple really didn’t want them here.

One of the few markers here at Gettysburg that honors Confederate soldiers can be found on Meredith Ave. in Reynold’s Woods & belongs to the 26th North Carolina Infantry. Engaged with the Union Iron Brigade on July 1st, this unit suffered very heavy casualties. They would lose a total of 588 men which would be the greatest numeric loss of any Confederate unit during the battle. They would also participate in Pickett’s Charge on July 3rd & a companion marker can be found at the Angle which notes their position on that day.

Their memorials were dedicated on October 5, 1985.