In 1861, the 13th Pennsylvania Reserves made a name for themselves through both their gallantry and their skill as sharpshooters. It became their trademark to each wear a deer’s tail on their caps, as well as to mount one upon their flagstaff, which led them to be called the “Bucktail Brigade.” Their renown was such that the Secretary of War requested a second Bucktail Brigade from Colonel Roy Stone. Col. Stone was happy to oblige, and recruited twenty companies from ten counties in less than twenty days. They were organized into the 149th and 150th Regiments of the Pennsylvania Volunteer Infantry. 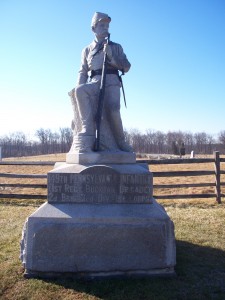 The 149th, or the “Second Bucktails,” were recruited in the summer of 1862 and were ordered to the front in early 1863. They first served in Chancellorsville, VA, before being advanced to Gettysburg.The regiment was positioned by Chambersburg Pike, on the ridge beyond the seminary, when the Confederates mounted a major assault. Colonel Stone was severely wounded and the entire Brigade was showered with heavy artillery fire. It was then that their color guard showed their true colors, so to speak, by moving their flags away from the fighting men and drawing the fire upon themselves. Their heroic sacrifice was a success, and the rest of the regiment was able to fall back to a better position.

A monument now stands in honor of the Second Bucktail Brigade, just off of Chambersburg Pike where they made their stand, near the McPherson Barn. The statue features a soldier who, if you follow his line of sight, gazes upon the spot where the valiant men of the color guard carried out their distraction. Out of 450 men engaged in the Battle, 53 were killed, 172 were injured, and 111 were missing, but the casualties would have been much worse if the flag-bearers hadn’t intervened. They are remembered as heroes.

The Battle of Gettysburg saw many examples of courage and heroism. Read more of them here.