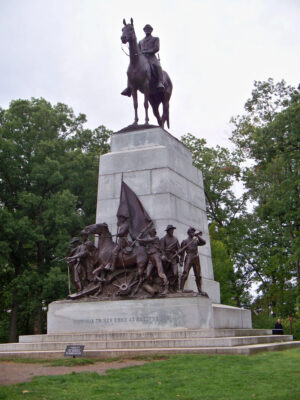 Dedicated on June 8, 1917 at a cost of $50,000.00, the Virginia State Memorial was the first southern state monument to be placed at Gettysburg.

It very successfully honors both the courage of the men from Virginia & General Robert E. Lee.

Mounted atop Traveller, his favorite war horse, the likeness of General Lee was captured by a study of photographs as well as life masks of the general done shortly before his death in 1870. It is considered the finest likeness of the General ever executed.

A study of the skeleton of Traveller located in Lexington, Kentucky & a live horse that closely matched the dimensions & carriage of the war horse helped in the creation of General Lee’s mount.

Seven figures surround the General. They represent the varied elements that made up the Army of Northern Virginia. The bugler & color bearer are mere boys demonstrating that many (on both sides of the war) were young. The remaining five represent a farmer, a mechanic, an artist, a professional man & a businessman.

The memorial is located on a portion of the field from which it is believed the General observed developments of the battle.