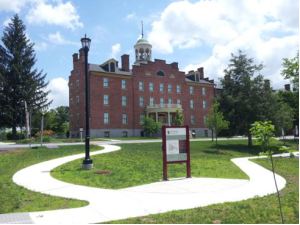 One of the top 10 things to do in Gettysburg according to Trip Advisor, the Seminary Ridge Museum features three unique areas of emphasis and offers a different perspective of the Civil War not found anywhere else in Gettysburg. If you’re interested in the crucial first day of the Battle of Gettysburg, how it acted as a hospital during the war, and the grand issues of freedom and faith, then the Seminary Ridge Museum is indeed a must during your trip to Gettysburg.

Originally acting as the Gettysburg Theological Seminary building, the Seminary Ridge Museum saw a variety of uses over its lifetime. Explore the rich history of each point in time, including:

Many visitors to Gettysburg like to start their adventure where the first day’s battlefield was, which is why Seminary Ridge is the best choice to begin your look back on the Civil War and Battle of Gettysburg. With numerous events and special exhibits, both indoors and out, there’s something for everyone at the Seminary Ridge Museum.

If you’d like to save some money on your trip, be sure to check out our value plan, which features three historic attractions at a discounted rate for our visitors. Other great stops include the Hall of Presidents & First Ladies, the Jennie Wade House Museum, and the Gettysburg Heritage Center, among others. You can explore all your options on our Gettysburg attractions page. We look forward to your trip, and be sure to let us know if you have any questions!