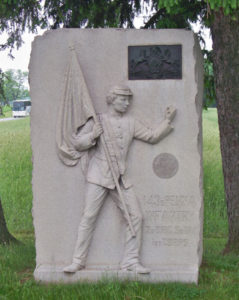 When driving out westward toward the first days field, found along Chambersburg Pike is a single block of granite on which the 6′ 1″ likeness of a Union soldier can be found. The soldier is Color Sergeant Ben Crippen of the 143rd Penna. Infantry & he is holding the National flag in one hand while he shakes his fist westward with the other.

Sergeant Crippen had been in the army for under one year & his job as bearer of the national flag was to insure that he was always visible to the men of his unit. As Confederate pressure increased & the Union line was forced back toward the Lutheran Seminary, Sergeant Crippen was one of the last to leave his position. As the Yankees slowly gave ground, Sgt. Crippen was seen by soldiers of both sides to stop, turn to the west & shake his fist at the advancing Rebel Army. Confederate General A.P. Hill expressed admiration for the gallantry & ultimate sorrow after seeing Sgt. Crippen finally fall.

Ben Crippens’ body was never recovered. The surviving members of the unit felt that Sgt. Crippen should be singled out for recognition on the monument that paid tribute to everyone.