In the year 1864, the city of Atlanta was lost. Not “Lost” like the city of Atlantis or the survivors of Oceanic Flight 815, but lost in the strategic sense. It began when the Union Army of the Tennessee, led by Major General James McPherson, pursued Confederate forces from Chattanooga all the way into Georgia. The pattern of Confederate retreat led to a change of command, and Lt. Gen. John Bell Hood stepped in to lead the Southern Army just five days before the Battle of Atlanta. His risky offenses led to five thousand casualties in the battle that preceded it, leaving his forces outnumbered two to one. 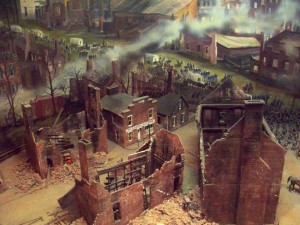 On July 22nd, Lt. Gen. Hood ordered a three-pronged attack, led by Generals Hardee, Wheeler, and Cheatham. Wheeler’s cavalry division was successful in repulsing Union forces from the nearby town of Decatur, but lacked the manpower to hold it. Meanwhile, on the front, the Confederates scored a major victory in the death of McPherson, shot while he was observing the battle. The Union artillery bombarded the city in response, while the primary fighting gravitated to Bald Hill. Here, it got ugly, sometimes degrading into hand-to-hand combat, and lasting until after the sun went down. The Union held the hill, and Southern forces were rebuffed.

At the end of the battle, the Confederacy still held the city, but they had lost 8,499 men, an enormous blow to their army. For over a month, Maj. Gen. Sherman laid siege to the city, prodding them with raids and eventually cutting off their supply lines. Hood was forced to evacuate his troops on September 1st, burning what they could as they escaped. The next day, the city surrendered itself to Union occupation. Lincoln’s re-election that year is often attributed to the success at Atlanta, which was a major boost to Northern confidence. The city itself was quick to recover, and continues to thrive today.

You can read about a time when the other side “Lost” here.