“I hope to have God on my side, but I must have Kentucky.”
– Abraham Lincoln 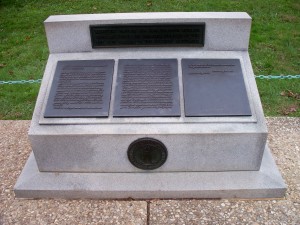 As a border state, Kentucky was in a strategic and sensitive position when the Civil War began. Both North and South vied for the state’s support and the valuable resources that would come with it. Kentucky, which had ties to both sides, was divided; they declared neutrality to avoid conflict, many hoping that Kentucky might act as a mediator in the War. Ultimately, a violation of neutrality forced their hand, and Kentucky sided with the North. A Confederate-friendly shadow government was formed as well, but had little impact on the War.

Kentucky supplied fighting men to both sides over the course of the Civil War, but no Kentucky Regiments fought at the Battle of Gettysburg. So, you might ask, why is there a Kentucky State Monument on the Gettysburg Battlefield? Well, Kentucky was the birthplace of the President of the Confederacy, Jefferson Davis, and the 16th President of the United States, a man you might recognize as Abraham Lincoln, orator of the Gettysburg Address.

The Monument is situated in the National Cemetery, east of the Soldiers’ National Monument, and near where we believe Lincoln delivered the Address. The marble sculpture is topped with a bronze plaque inscribed with the Bliss copy of the Gettysburg Address. The Bliss version was the fifth and final version written by Abraham Lincoln himself, and the only copy that he signed. The Monument was dedicated 37 years ago this month, on the 112th Anniversary of the Gettysburg Address.

The Gettysburg Battlefield is home to a wealth of monuments and memorials with fascinating back-stories. Read about the Oldest Union Commander or The 88th!