“Damn the torpedoes! Full speed ahead!” This familiar phrase, or a variation of it, was shouted over the roar of gunfire by Rear Admiral David Farragut during the Battle of Mobile Bay. The other Confederate ports along the Gulf of Mexico had been captured; Mobile was the only significant holdout. While Farragut held an advantage in superior numbers, his fleet would have to pass through a minefield, survive the barrages of shore-based guns, defeat an ironclad vessel, and then lay siege to three forts. Torpedoes might have been the least of his worries! 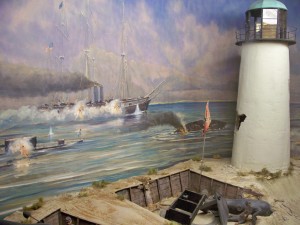 The Battle occurred on August 5, 1864, soon after the Battle of Atlanta, but before the city’s surrender. The Federal fleet chanced the minefield on Farragut’s orders, and although they lost an ironclad, the Tecumsah, the majority of their ships survived and quickly dispatched the three Confederate gunships. That left only the ironclad CSS Tennessee afloat. Instead of retreating, Confederate Admiral Franklin Buchanan ordered the ship to engage, taking on all of the remaining Union fleet by itself, equipped with just six guns.

The Tennessee put up quite a fight, dealing far more damage than she suffered. Union bullets ricocheted off of the hull, as did the sloops that rammed the ironclad. Sheer numbers eventually overwhelmed the Tennessee, having rendered her boiler, rudder, and guns inoperable. Three hours after the first shot was fired, a wounded Buchanan gave the order to surrender. 1,587 Confederates were captured—only 13 had been killed, to the Union’s 151 dead. The siege of the three forts followed; by August 23rd, each of them had surrendered.

Full speed ahead to another battle! Why not try the bloodiest day of fighting in American history at Antietam?