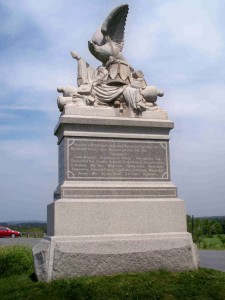 On September 11, 1889, this memorial was dedicated to the men of The 88th Pennsylvania Volunteer Infantry Regiment, also known as the “Cameron Light Guards” or just “The 88th.” You can find the monument on Doubleday Avenue on Oak Ridge, which is the spot where they encountered the Alfred Iverson’s North Carolina brigade on July 1st, 1863.

For most of the month of June, the men of The 88th had marched onward to Gettysburg under the lead of Major Benezet F. Foust, sometimes traversing 30 or more miles in one day. Upon their arrival, they found themselves in the thick of things, skirmishing with Iverson’s brigade. Iverson’s men sheltered in a hollow, giving them the advantage, and for two hours they rained heavy musket fire on the Union Soldiers. In spite of the barrage of bullets, The 88th boldly charged across the open field and breached the hollow, where they captured two battle flags and almost a whole brigade of prisoners. 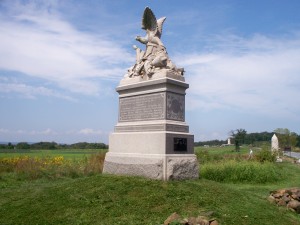 The Battle of Gettysburg cost The 88th PA Infantry 121 men (18 killed, 50 wounded, 53 missing) out of their 294, or 40% of their number. On August 27, 1883, survivors of the regiment erected three battlefield markers: one lies 80 yards west of the main monument to mark the length of their charge; one rests on Cemetery Ridge, indicating where they fought on July 2nd; and the final one was placed in Ziegler’s Grove, near the former Cyclorama building, the position that they held from July 3rd to July 6th.

The main monument depicts a protective eagle, wings outstretched, perched upon a large stack of almost 20 pieces of common soldiers’ equipment. Inscribed below that is the history of the regiment and a list of the engagements they fought in.

Read more about the rich history of Gettysburg’s monuments here and here!