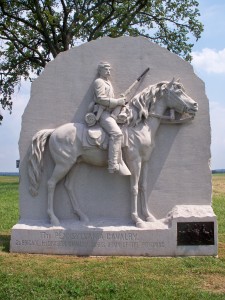 Recruited from 13 Counties and the city of Philadelphia, the 17th Pennsylvania Cavalry was comprised of skilled horsemen—farmers, mechanics, and lumbermen—most of whom had never seen battle before. From 1862 to 1865, they would experience quite a lot of action, but nothing quite so fierce as what they faced in July of 1863: The Battle of Gettysburg.

As the men of the 17th rode into town, they were welcomed with cheers and patriotic anthems. They scouted out defensive locations North of Gettysburg and set up headquarters in the John Forney barn. With morning came the sounds of battle, and the 17th began to establish skirmish lines and vedettes (lookouts, essentially), when General Buford announced that their location was “the key to the army position” and must be held at all costs.

Armed with Merrill & Smith carbines, the 17th PA Cavalry fought valiantly to hold their position on Seminary Ridge against a powerful Rebel onslaught. After hours of this, the Union soldiers were exhausted, and their ammunition nearly so. They fought alongside the rest of the Second Brigade in a 2-mile-long skirmish line until Maj. General Oliver O. Howard reinforced them with his 11th Corps.

The 17th Pennsylvania Cavalry played a vital role in holding back the Confederate Army on that day in 1863. In their honor, a monument was erected and dedicated on September 11, 1889—123 years ago, this week. A veteran of the regiment, George W. Ferree, was used as the model for the memorial, which displays a stoic mounted cavalryman carved into granite.

You can visit this Monument at the corner of Buford Ave. & Mummasburg Road, near the Peace Light Memorial. Also, check out the Lonely Mural, the Amos Humiston Memorial,  the 90th PA Infantry,  and the Virginia Monument!