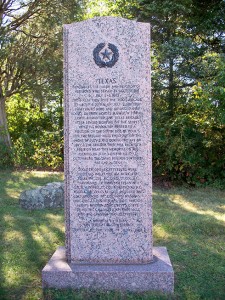 Located on South Confederate Avenue & made from Texas red granite stands a very plain memorial to the fighting units of the State of Texas.

Often a disappointment to Texans who expect to see something much grander, the placement of this simple marker at Gettysburg carries with it an interesting story. The Texas Memorial on the Gettysburg Battlefield is one of eleven identical monuments erected on battlefields where Texas troops had fought during the Civil War.

In comparison with the other southern state memorials here, the Texas marker appears unimposing & plain until one realizes that  it signifies the courage & sacrifice of Texas soldiers everywhere & that no battlefield was more or less significant than the other.