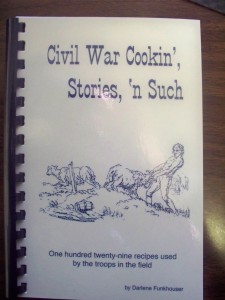 Here at Gettysburg, July is our anniversary month. There are so many events going on, it really is a great time to visit. For our feature recipe we thought it only fitting to share with you a recipe that was used during the Civil War.

Scald milk, combine cornmeal, salt, baking soda, cream of tartar, and sugar. Slowly stir the dry mixture into the scalded milk and bring to a boil, stirring all the while.

Remove from heat, stir in butter. Beat egg yolks until thick and stir in one-fourth of the hot mixture, then stir yolk mixture into remaining cornmeal mixture. Beat egg whites until stiff peaks form, and fold into the cornmeal mixture.

Pour spoonbread into greased baking pan and bake at 350 degrees for 25-30 minutes (until puffed and light brown). Since spoonbread is basically a cornmeal soufflé, it must be served immediately.  This recipe is taken from the book Civil War Cookin’, Stories, ‘N Such by Darlene Funkhouser.