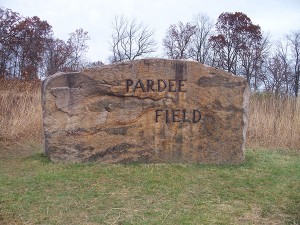 Located on Geary Avenue on Culp’s Hill is a large rock with the inscription “Pardee Field” etched upon it. What exactly does this represent?

In the morning hours of July 3rd, as the battle for Culp’s Hill continued, some very brutal & heavy combat erupted onto this lower portion of the slopes.

Colonel Ario Pardee of the 147th Pennsylvania Infantry led his men in a charge across this open terrain determined to drive the Confederates from their works behind a stone wall toward the rear of this field. A Confederate counter-attack ensued.

Brig. General John Geary of the Union Army reported nearly 1200 Confederates killed, 500 taken prisoner & a great number were wounded during the action in this area. This encounter in Pardee’s Field represented the final Confederate offensive action on this portion of the Battlefield.