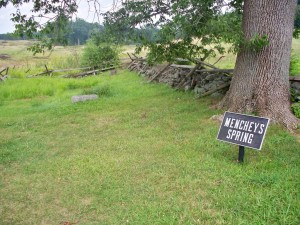 Located at the base of East Cemetery Hill can be found Wainwright Ave. named for Charles Wainwright of the Union 1st Corps Artillery.

Just across Wainwright Ave. & lined by fences is a lesser known spring which was used by both Blue & Gray.  Menchey’s Spring supplied refreshment to union soldiers & also served confederate sharpshooters in their attempts to wrest control of the hill away from the Union forces.

In 1915 the remains of a Union soldier – identified by a US belt buckle & buttons – was found near this Spring. This soldier was re-buried in the National Cemetery.