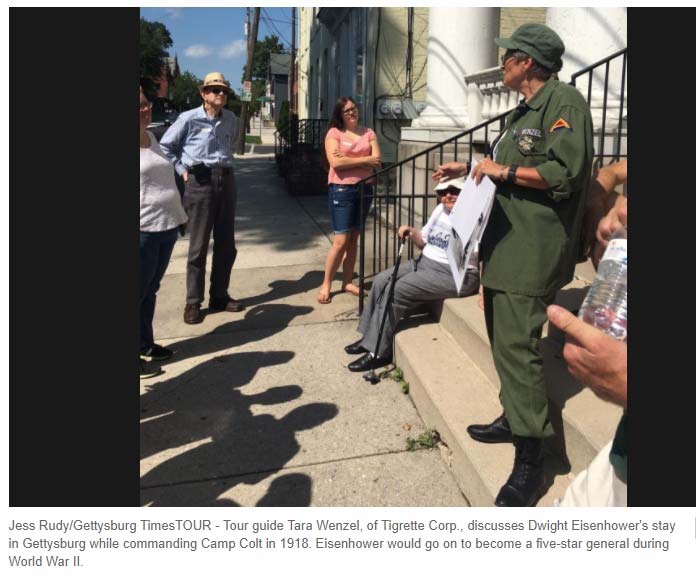 A new tour in Gettysburg expands the bounds of the historic battlefield to connect visitors and locals to the town’s World War II heritage.

This summer, Gettysburg Tour Center started offering “World War II in Gettysburg: The People and Places.” The bus tour takes participants through sites in and around Gettysburg and discusses Adams County’s connection to the epic conflict. Tour dates are scheduled to coincide with significant events in World War II history.

On Saturday, a tour was offered to mark the beginning of World War II. In August of 1939, Germany and the Soviet Union signed a non-aggression pact. A few weeks later, on Sept. 1, Germany invaded Poland, setting off what would become world war. Germany broke the pact by invading the Soviet Union in June 1941.

Nearly 20 people took the three-hour bus tour of the town and battlefield Saturday. Participants ranged from curious local history buffs and fans of Dwight D. Eisenhower, to a teacher from Maryland, and a family who traveled to town especially for the adventure.

The tour was led by Tara Wenzel, a guide with Tigrett Corp., a company specializing in leadership training that partnered with Gettysburg Tour Center for the new offering.

Initial stops in the tour highlighted the connections Gen. Dwight D. Eisenhower had to Gettysburg. The five-star general who commanded European theatre operations during World War II later became the 34th President of the United States. He chose Gettysburg as his home in the early 1950s when he and wife Mamie purchased a farm south of town.

Eisenhower-related stops included the Gettysburg Presbyterian Church, where he worshipped regularly, and the Gettysburg branch of the Adams County Library. The imposing building on Baltimore Street is the former home of the post office, National Park Service, and War Department. It was the location of Eisenhower’s temporary office in late 1955 while he convalesced in Gettysburg following a heart attack.

Then the group traveled to the Gettysburg Hotel, and Christ Lutheran Church, where they discussed Eisenhower’s West Point class visit to Gettysburg in 1915, and his command of Camp Colt, a tank training camp located on the Pickett’s Charge site during 1918.

Still other stops highlighted Eisenhower’s life in Gettysburg before the tour progressed to the Eternal Light Peace Memorial located northwest of town. Dedicated in 1938 at the 75th anniversary of the Battle of Gettysburg, the monument symbolized reconciliation of North and South in the wake of the Civil War. The dedication and anniversary also marked the last reunion of Civil War veterans at
Gettysburg.

President Franklin D. Roosevelt spoke at the dedication of the monument. Saturday’s tourists had the opportunity to hear excerpts of his speech, wherein he praised America’s efforts towards unity and peace in the wake of the rising tensions in Europe and Asia, which in a few years would lead to war.

The highlight of the tour was a jaunt down Confederate Avenue. However the topic of discussion was not Pickett’s Charge or 1863 battle action. Rather, the thoroughfare was also in the middle of Camp Colt (commanded by Eisenhower), a prisoner of war camp that eventually held 900 prisoners over the course of World War II, and the Civilian Conservation Corps camp in McMillan Woods that was converted to Camp Sharpe, a psychological operations training camp.

Nearby, Wenzel discussed rationing and scrap drives during World War II and revealed how close bronze markers and statues on the battlefield came to being melted for war use.

On a poignant note, the journey wrapped up in Soldiers’ National Cemetery, where the group met at the graves of over a dozen men who fought and died during World War II. They are among hundreds of veterans of the war buried there. Their final resting places are along the west wall of the cemetery, within sight of Soldiers’ National Monument.

She said the family has been to Gettysburg several times and the tour was a nice departure from typical Civil War-based offerings.

The next “World War II in Gettysburg: The People and Places” tour is set for Sunday, Sept. 17 at 9 a.m. The tour coincides with the annual World War II Weekend at Eisenhower National Historic Site.

[For more info on the tour and to order tickets, please visit – https://www.gettysburgbattlefieldtours.com/wwii-in-gettysburg-the-people-and-places/]