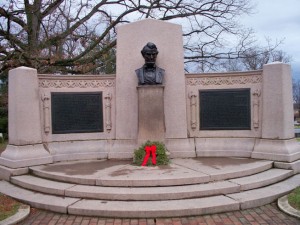 The Lincoln Speech Memorial, erected on January 24, 1912, was part of the bill that Representative Daniel Sickles submitted and had passed on February 11, 1895. This was the bill that created Gettysburg National Military Park. Designed by Louis Henrick and costing $5,000.00 to complete, the curved wall memorial surrounds a bust of Abraham Lincoln that was sculpted by Henry Bush-Brown. To the left of the President is a bronze plaque of the letter sent to Lincoln by Judge David Wills inviting him to Gettysburg, while the right side plaque is a copy of the Gettysburg Address. Flanking each plaque are ax heads which represent strength and unity while the stars at the top of each are representative of the states that remained loyal to the union. This memorial is often confused as the site of the Gettysburg Address, which was actually given about 300 yards to the north of the memorial.

The invitation sent to President Lincoln beseeched him to “formally set apart these grounds to their sacred use” and to give “gratifaction to the many widows and orphans that have been made almost friendless by the great battle here”. Lincoln’s task was also to “kindle anew in the breasts of the comrades of these brave dead…that they are not forgotten by those highest in authority”. President Lincoln did all of this, and much more.

Now hailed as a literary masterpiece, the Gettysburg Address and its theme were not new to Americans. Daniel Webster made a statement in 1830 saying “the origin of our government and the source of its power is the people’s constitution, the people’s government, made for the people, made by the people and answerable to the people.” Supreme Court Justice John Marshall stated “The government of the Union…is emphatically and truly a government of the people…its powers are granted by them and are to be exercised directly on them, and for their benefit.” In an anti-slavery address, Reverend Theodore Parker addressed Boston saying that democracy is “a government of all the people, by all the people, for all the people.” Lincoln did not make this theme a repetitious mantra without meaning, he transformed it into America’s greatest patriotic utterance, giving meaning to sacrifice and inspiration for life then, and life now.