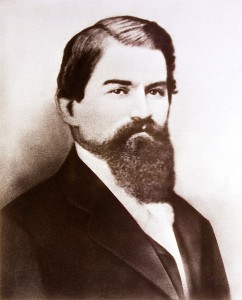 Perhaps one of the most interesting stories to come out of the Civil War is also one of the least known, except among the most avid Coca-Cola fans. The story of Coca-Cola actually begins with a Confederate Colonel, who is the featured character in our first installment of our lesser known Civil War celebrities blog.

John Stith Pemberton, nephew of the more well-known Confederate general John Clifford Pemberton who unsuccessfully defended Vicksburg Mississippi against Ulysses Grant and his army, was a native of Georgia who grew up educated in both medicine and pharmacy. Just like his uncle, John Stith enlisted in the Confederate army in the early 1860’s.

John Stith did not possess a celebrated military resume like his uncle. His unit was said to be in charge of defending the area around Columbus, Georgia in case of a Union attack. This area was important due to the city’s large production of military goods and war materials, as well as it having a large naval facility.

The Union had realized that if Columbus fell it would then cripple the Confederacy’s ability to supply its war efforts, and this led to the Battle of Columbus. During this siege on the city, John Stith was said to have been almost killed in its defense. This contributed to an addiction to morphine, which was common among wounded soldiers during the Civil War.

John Stiths’ background in medicine and pharmacy, as well as his awareness of his addiction, fueled his drive to find something that would help relieve his dependence on morphine. Initially John Stith developed a mixture similar to french chemist Angelo Mariani’s concoction Vin Mariani, but modified it slightly to contain more than just coca leaves extracted in wine.  John Stith’s new wine infused formula included coca as well as an extract of kola nuts, and was sold in drugstores around Atlanta where it quickly grew in popularity.

Due to prohibition in 1886, John Stith had to modify his formula once more to remove the alcohol. The trial and error experimentation process was underway, and eventually a perfect and “classic” balance was created.  This balance still included the two main ingredients, coca leaves and kola nuts, as well as carbonated water and syrup. You can probably see that he took the name from his two main ingredients, and thus Coca-Cola was born!

Even without am impeccable military career John Stith’s war-time played an important role in the famous drink we enjoy today.  Enjoy Coca-Cola!