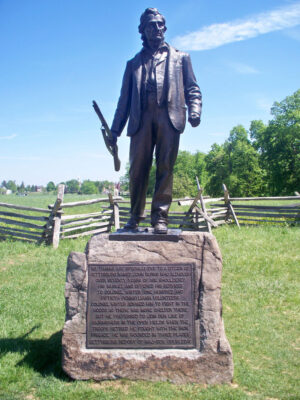 Depending on who you talk to, John Burns may not fully qualify for our “Lesser Known” series, but we’ve seen plenty of visitors who are unfamiliar with the story of Mr. Burns. For those of you who fit this description, we share the story of the man whose statue stands on McPherson’s Ridge here in Gettysburg, a statue commissioned by the State of Pennsylvania in 1903.

John Burns was born in Burlington, New Jersey on September 5, 1793. While the details of most of his early life are unknown, his story typically picks up with his enlistment in the War of 1812 where he fought in numerous battles, including one of the bloodiest battles of the war – the Battle of Lundy’s Lane.

Following that war, Burns worked at a variety of vocations in Gettysburg, including boot and shoemaker, carriage salesman, and town constable. He seems to have lived a quiet life until the Civil War broke out in 1861.

Now in his late 60s, Burns once again felt the call to duty, and attempted to enlist in the Union army. Not surprisingly, he was turned away from combat duty due to his age, and was also denied admission to the reserves. Determined not to be denied his chance to serve, Burns worked as a Union teamster until he was sent home against his will.

As the town constable in 1863, Burns didn’t take too kindly to Confederate Major General Jubal Early’s arrival with his cavalry in June, and was eventually jailed for resisting Early. Released just two days later as the Confederates moved on, Burns was even more fed up.

Two days later, on June 30, Union Brigadier General John Buford arrived, and Burns was happy to reveal the Confederate army’s recent activities. Buford then remained in Gettysburg, and on the morning of July 1 the Confederate infantry attacked Buford’s cavalry as the Battle of Gettysburg began.

On that fateful morning, Burns felt his calling once more, grabbed his flintlock musket and powder horn and headed towards the battle to the west of Gettysburg. Fortunately for Burns, he passed two wounded Union soldiers who were on their way back to town, and he was able to talk one of them into giving him a more modern rifle and some ammunition.

Burns eventually ran into Major Thomas Chamberlain of the 150th Pennsylvania Infantry, and requested to join the fight. Chamberlain referred Burns to regimental commander Colonel Langhorne Wister, who agreed to send Burns into the woods beside the McPherson Farm where he’d fight alongside the 7th Wisconsin Infantry and also the 24th Michigan.

Burns fought with the infamous Iron Brigade all afternoon, where he performed as a sharpshooter. Suffering wounds throughout his body, Burns was left behind as Union soldiers began to withdraw.

Burns knew he was in danger and crawled away from his rifle and buried any remaining ammunition before passing out due to blood loss. Confederate troops eventually came across Burns, and asked who he was. As he was dressed in civilian clothes, Burns was said to have told them he was trying to get to a nearby farm seeking help for his sick wife (or in search of his missing cows), but he was unfortunate and got caught in the crossfire. While the troops didn’t believe him, they let him live, and eventually Burns returned home to recover.

Burns’ heroic story quickly spread, and famed photographer Mathew Brady captured shots of Burns during a visit to Gettysburg. President Abe Lincoln also met with Burns during the visit where he delivered the Gettysburg Address. There were poems, books, and monuments dedicated to Burns.

John Burns died in February of 1872 of pneumonia, and is buried in Evergreen Cemetery in Gettysburg next to his wife.