One of the most versatile fighters of the Civil War was likely someone you never heard of, nor was she born in America. Our next Civil War celebrity to be celebrated in our series is one of the few women who fought in the Battle of Gettysburg, and she bravely supported the Union army even though it was prohibited for women to enlist in either army. Join us in remembering “Fearless French Mary” in our second “Lesser Known Civil War Celebrities” spotlight. 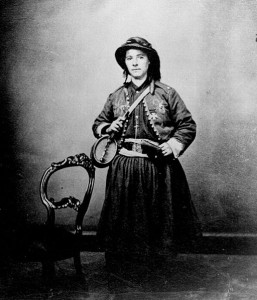 Marie Brose was born in Brest, France in 1834 and immigrated to the United States in the 1840’s. She married a local Philadelphia tailor named Bernhard Tepe, who joined the Union army when the Civil War broke out. Being the strong-minded woman that she was, she ignored her husband’s request to stay at home and oversee the shop, and instead followed her husband as he joined the 27th Pennsylvania Volunteers.

Acting as a vivandiere, a French word that describes women who accompany their spouse’s regiments in action, Marie administered aid to troops, cooked, did laundry, provided water, and sold provisions including whiskey in combat areas within range of Confederate fire.

Unfortunately for Marie her time with the 27th Pennsylvania Volunteers would end one night after her husband and a few friends broke into her tent and stole a large sum of money from her. Marie left her husband, but still had the desire to serve the Union army. She joined the 114th Pennsylvania where she became known as “French Mary,” and made quite the name for herself.

Known for carrying a small keg of whiskey strapped to her shoulder, Marie supported herself selling provisions once the Paymaster’s Department refused to pay her anymore. She also fought in a dozen battles, including the Battle of Fredericksburg, where she was shot in the ankle and continued to fight.

A decorated war veteran, Marie earned several recognitions for her service to the Union. These include:

To the delight of her fellow members of the 114th Pennsylvania, in 1893 Marie attended a reunion to celebrate the anniversary of the Battle of Fredericksburg with her famous whiskey keg strapped around her shoulder. Unfortunately just a few short years later in 1901, Marie took her own life. Just as sad, Marie laid in an unmarked grave for over 80 years. This was rectified in 1988, when a gravestone was dedicated in a ceremony in Carrick, Pennsylvania (A neighborhood in the city of Pittsburgh, it is not a city/town/borough).