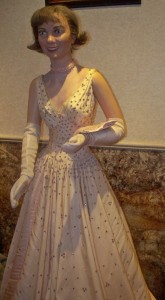 The first woman in our series is the great Mamie Eisenhower, wife of President Dwight Eisenhower, and one of the area’s favorites since she spent her retirement at the home now known as the Eisenhower National Historic Site.

Mamie Geneva Doud was born in Boone, Iowa into a privileged situation as her father made a fortune in the meat packing industry. Her father was able to retire early due to this fortune, and moved his family several times, eventually settling in Denver, Colorado. Due to the cold winters Mamie’s mother insisted on a home in San Antonio, Texas to escape the severe winters. It was here she met Dwight, and at the age of 19 married a military man whom she would follow around to his numerous career assignments.

Mamie certainly made a name for herself as a first lady as well building a legacy of her own during her tenure at Pennsylvania Avenue. Some of the magnificent achievements she accomplished during her run up to and time as First Lady include:

Mamie carved out her own unique role in history and the list of her accomplishments is quite extensive in her own regard. Along with Dwight the Eisenhowers retired to Gettysburg at what is now known as the Eisenhower National Historic Site. Be sure to check out the Hall of Presidents and First Ladies, as well as the Eisenhower National Historic Site on your next visit to Gettysburg. We highly recommend a Christmas visit as well, as the home and farm is decorated just as Mamie had when they lived there. It is quite the sight to see!