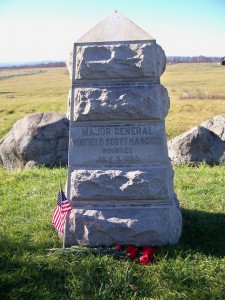 Located on Hancock Avenue atop a small rise is the General Winfield Scott Hancock wound site memorial. Mounted on July 3rd General Hancock watched as Pickett’s Charge was underway & during the action was wounded in the groin  by a bullet that struck his saddle & also sent a nail into the wound. Although seriously injured, General Hancock refused to leave the field until the Charge had been repulsed. After which he turned over command to Brigadier General Caldwell. This wound would never completely heal & would effect him for the remainder of his life.

After the Civil War General Hancock would continue to serve in the military & went on to run for President of the United States on the Democratic ticket in the election of 1880.

General Hancock passed away on February 9, 1886 & is buried in Montgomery Cemetery in Norristown, PA.