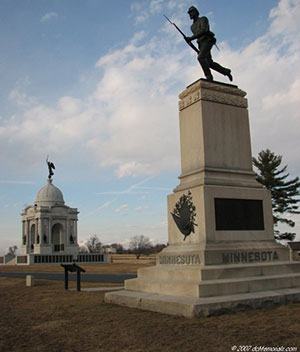 As the day wound down on July 2, 1863, Alabama troops under the command of Brigadier General Cadmus Wilcox threatened to overwhelm Union forces in their front and capture Cemetery Ridge.

In a last ditch effort to buy some time, Union General Winfield Scott Hancock instructed the men of the 1st Minnesota to strike the advancing Alabamians and to take their colors.

Eight companies (262 men) charged into the breach. There were 215 casualties for a full 82 percent loss.

This was the largest percentage of loss suffered by any Union regiment during the entire war.

On top of the base a bronze soldier at the “double quick” runs toward the ravine where contact was made with the boys from Alabama.