At Gettysburg Battlefield, there are hundreds of monuments placed all over the great expanse of land. These monuments represent both soldiers and states that fought valiantly to change the course of history in Gettysburg on that fateful summer day. We invite you to explore the history behind these beautiful monuments, and search for your favorites during your bus tour of the battlefield. 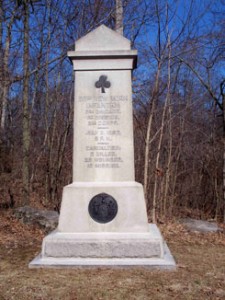 The 66th New York Infantry Monument stands proud in its solidarity on Sickles Avenue at the Loop. A simply designed monument, rarely sought out, yet rich with history and honor, it marks the most advanced point the regiment attained during their charge at Wheatfield on July 2nd, 1863. Its aura is somber, and its façade depicts the cost of war: casualties. 5 killed, 29 wounded, and 16 missing. On its reverse, however, is a simple bronze plaque entitled “Peace and Unity”. 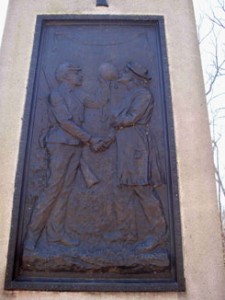 Dedicated on October 9, 1889 and costing $1,500, the 66th New York Infantry Monument proudly displays peace and unity in its truest form. It is a beautiful forging of two soldiers – one in Union blue, and one in Confederate grey. They are shaking hands and sharing a canteen of water, just like brothers would. Perhaps this is what a former member of the regiment meant when he said his unit was an “…ordinary, everyday regiment”. Everyday men share a handshake and a cup of water. Everyday men are united in common purpose for peace in life. Everyday men fight for what they believe in, just as the men of the 66th did that July day, 1863. 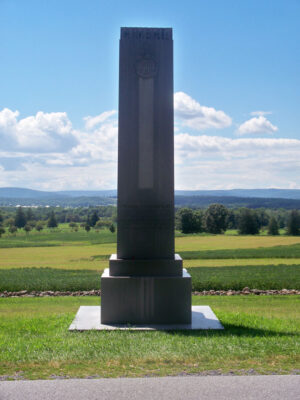 In the spring of 1961, as the centennial celebration of the Civil War drew near, the Georgia State legislature set aside funds necessary to honor all Georgian casualties of the battles of Gettysburg & Antietam.

Two identical monuments (one on each field) were dedicated in September of 1961 to honor the approximately 13,185 Georgian men at Gettysburg. The Gettysburg memorial is near where General Paul Semmes’ Georgia brigade was in position during the battle.

Located on West Confederate Avenue, the plain shaft of Georgia blue granite has the state seal of Georgia on both the front & back. The only inscription is the simple epitaph to the Georgia dead:

The State of Massachusetts was the first to appropriate funds to assist their veteran’s associations to place monuments honoring their fallen men on the Gettysburg battlefield. The monument, which can be found on Robinson Avenue, was dedicated on Sept. 25, 1885 and cost $500.00 to erect.

The 13th Massachusetts Volunteer Infantry valiantly clung to critical part of the Union line on July 1st, withdrawing only when further defense became hopeless. The monument depicts a colored sergeant of that unit; some stories imply that the soldier depicted was actually killed on the spot occupied by the present-day monument.

The 13th Massachusetts Infantry arrived on the field with 284 men and suffered 65% casualties – 7 killed, 77 wounded & 101 missing-in-action. 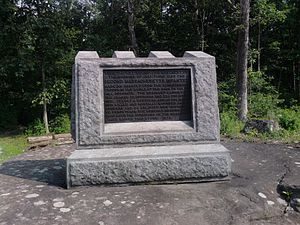 As you explore the expansive Gettysburg battlefield, take the time to stroll down Carman Avenue until you reach the edge of Spangler’s Meadow. There, perched atop a boulder, you’ll discover a monument to the 2nd Massachusetts Infantry, the first memorial of its kind. The morning of July 3, 1863 saw this regiment of 316 men storming through the meadow in a charge that cost them almost half of their men.

The 2nd Massachusetts Infantry were essentially used as pawns to lead a deadly frontal assault on open ground. Lt. Col. Charles Mudge, upon receiving these orders from his commander, spoke his iconic words: “Well, it is murder, but it’s the order.” Won’t you spare a moment to pay tribute to these brave souls?

There are quite a few portions of the battlefield that (sadly) see little or no visitation – this is one.

The Confederate artillery battalion of Lieutenant Colonel Hilary Pollard Jones arrived on the fields of Gettysburg on July 1, 1863 along with the Division of Jubal Early of the Confederate 2nd Corps. Jones’ Artillery Battalion supported a successful flank attack on Union General Oliver Howard’s 11th Corps on the other side of Rock Creek. The battalion also provided fire against Union 1st Corps troops withdrawing from Seminary Ridge. Most of the battalion was unengaged for the rest of the battle.

The battalion was composed of 4 batteries – Carrington’s, Tanner’s, Green’s & Garber’s. Green’s battery found itself involved with the cavalry battles of July 2nd & 3rd. The remaining 3 batteries, however, remained in position here & were not further engaged after July 1.

Only 2 batteries reported their casualties. For the two reporting, there were 2 men killed & 6 wounded total for the battle. 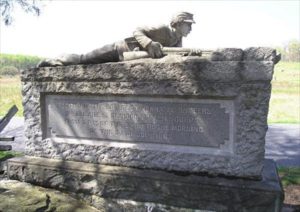 This unit would not see action during the battle as it was placed in a defensive role. The regiment spent much of the battle holding the line lying in the muddy low ground around Plum Creek. The defensive nature of their duties is depicted by the vigilant infantryman as he watches for sign of enemy movement. 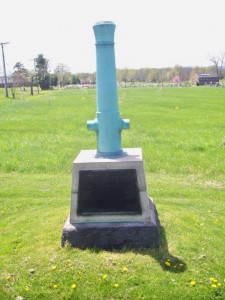 While travelling through the Gettysburg Battlefield, scattered among the memorials, cannons, and monuments, a visitor might notice an upright cannon barrel standing atop a pedestal base. On some Civil War battlefields, these markers represent the site where a particular General was killed or wounded.

Here at Gettysburg, however, they are sometimes (lightheartedly) referred to as Union/Confederate Anti-Aircraft battery markers; they truly mark the location of a Union or Confederate corps commander’s headquarters. There is little to distinguish between the two sides except that the cannon barrel is generally longer for a Union headquarters location.

Including the marker for army commander General George G. Meade there are a total of ten Union markers – while, including General Robert E. Lee, there are four for the South. Can you find them all on the Gettysburg battlefield?

The Soldiers & Sailors of the Confederacy Memorial 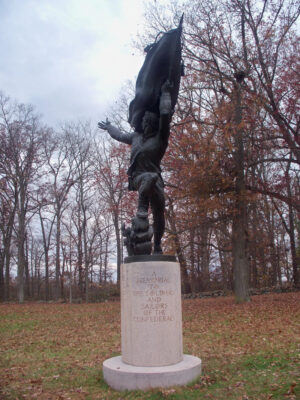 All eleven Confederate States plus three border states (Missouri, Maryland, and Kentucky) contributed to the monument’s construction, which was sculpted by Donald DeLue and dedicated on August 25, 1965.

The statue represents a southern color bearer leading the charge & urging those behind him forward.

A name can be found at the rear of the monument – Walter Washington Williams. On December 19, 1959, Mr. Williams, a former forage master of a Texas regiment, passed away at the age of 117.

It was thought at one time that Mr. Williams might have been the last Confederate veteran to pass away. Officials of the National Park Service, however, currently doubt that this might be true and believe that John B. Salling, of the 25th Virginia Infantry, who passed away on March 16, 1959 at 112 rightfully deserves the honor. 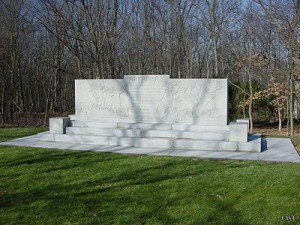 Located on West Confederate Avenue is the Arkansas State Memorial. While only one regiment from this state fought at Gettysburg, it represented Arkansas proudly and cost roughly $50,000 to erect.

The Third Arkansas Infantry was part of Jerome Robertson’s famed “Texas Brigade” and was fully engaged in the fierce fighting for Devil’s Den on July 2, 1863. Of the 479 troops from Arkansas at Gettysburg, 182 (or 38%) were either killed, wounded, or missing by the end of the battle.

This memorial, which was dedicated on June 18, 1966, is made of Mt. Airy granite and contains an outline of the state in the center flanked on either side by advancing infantrymen. The unique aluminum cubes at the monument’s corners each contain the carved image of the Confederate battle flag & are meant to represent Arkansas’ modern-day role as a producer of this metal.