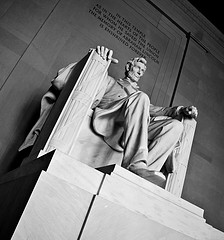 Abraham Lincoln, who was assassinated in April of 1865, was the first American president to be killed in office.

In some ways, his murder came as no surprise. There was no Secret Service at the time and he’d been receiving death threats since he was first elected, and the nation was at war with itself.

The one man assigned to protect the president at Ford’s Theatre that fateful night, John Frederick Parker, was not at his post during the show. He spent some of his time watching the show from a different part of the theatre and spent the intermission at the saloon next door, which is where he was found when the president was shot.

Unfortunately, this wasn’t unexpected. Presidential security was, at the time, scattered at best and hampered by Lincoln himself.

There were elaborate security precautions at the inauguration but they were quickly dropped for Lincoln’s first term—at his insistence.

I went across the street… The area in front of this northeast corner of the Capitol was filled with spectators to the number of many thousands. Just before the appearance of Mr. Lincoln, a file of soldiers, doubtless regulars, came into the area, and marched along in front of the platform, slowly making their way through the crowd. From where I stood I could see their bayonets above the heads of the people. There was at that time serious apprehension that the President might be shot when he appeared to make his address, but this small company of men was all that was in sight in the way of defense. It was quietly understood, however, that several hundred men were scattered through the crowd armed with revolvers.

But shortly thereafter, even the mounted and foot guards posted at the White House gates were dismissed.

In late 1862, two companies were assigned to protect the President — the Union Light Guard of cavalry from Ohio and the 150th Pennsylvania Regiment of infantry- at the insistence of various military leaders.

The special cavalry division, the “bucktails”, were assigned to escort Lincoln, who was prone to riding alone. Their efforts were met with marginal success.

Lincoln rode particularly often between the White House and the “Soldier’s Home”, an area in the Northeast part of the city, that was country-like and where the Lincolns had a small cottage. It was approximately a three-mile ride. He also changed his travel schedule at will.

Lincoln also frequently walked from the White House to the War Department—where the staff was under strict orders to make sure that he was escorted home.

In August of 1864, while Lincoln was riding to Soldier’s Home, he was fired upon. The shot startled his horse, which bolted, causing Lincoln to lose his hat.

It also forced Lincoln to take security more seriously, and allow for both a police guard and to accept the cavalry escorts.

It wasn’t until November, 1864 that the police force in Washington, D.C. created a four man team to act as private body guards to the president.

John Frederick Parker was one of those men. And his actions that fateful day in April let down a man, and a nation, struggling for security.