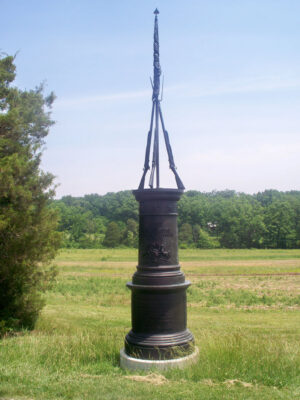 Located on North Reynolds Avenue & dedicated on September 11, 1889 the memorial to the 56th Pennsylvania Infantry can be found. This is the regiment credited with firing the first organized Union musketry volley of the battle.

At approximately 10:15AM on July 1st as Confederate General Davis’ Mississippi brigade advanced toward the town, the 56th Pennsylvania swung into battle line & commenced to fire at the enemy.

Three Springfield rifled muskets with fixed bayonets crown the top of the unit memorial. These represent the same weapons which fired the first volley. A furled & sheathed battle flag in the center completes the design.