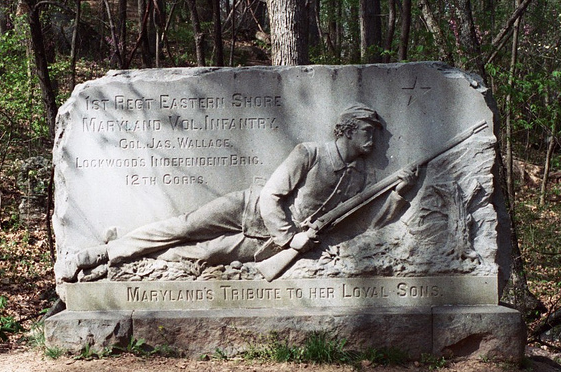 The State of Maryland provided men to both sides during the American Civil War & had native sons fighting in both armies at Gettysburg. Marylanders North & Marylanders South faced off against each other on Culp’s Hill.  The 1st Eastern Shore Maryland Infantry was one of five regiments from this state in the Army of the Potomac at Gettysburg. Found on North Slocum Avenue is their very artistic memorial depicting the Union defense of this vicinity on July 3, 1863. The monument which depicts an infantryman lying behind a rock for protection was dedicated on Oct. 25, 1888 & cost $1,000.00 to produce.